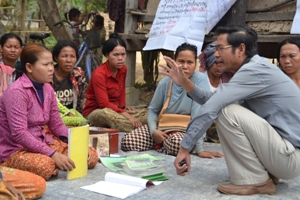 Project Coordinator Pich Sophin, ADDA, is explaining a self help group about the cashbooks.

Background and target group:
Cambodia is in many ways still highly influenced by the civil war in the 70´ties and this contributes significantly to the general picture of poverty in the country. The war left many widows and thus many families leaded by women. Most women live in the countryside where they make their income through farming. During the war many women took over the traditional roles in farming from the men, such as plowing, irrigation, threshing and tillage of the land. At the same time they went on with their own traditional chores, e.g. producing vegetables, going to the market, taking care of the household and cooking for the family. Today the women are still to take care of the field work
Today, women still carry out the tasks in the field, but actually they have not enough knowledge to improve the production. The yield from the fields and vegetable gardens are generally very low. The reasons include lack of education and knowledge of effective and sustainable production methods.
The grant from FAHU is specifically targeted to support 66 Self-Help Groups (SHG) from ADDA´s Danida supported IWEP II project (Integrated Women Empowerment Project), which was completed in 2013. The project’s target group is poor and typically landless, women in Siem Reap province in Cambodia. The 66 SHG was formed in late IWEP II project and the project’s conclusion was that they could not yet be expected to be self-propelled. FAHU gives with this donation support to 66 women’s groups.

Objectives of the FAHU Project:
The overall development objective is to combat and reduce poverty among rural women and women-headed households in five districts in Siem Reap. The project’s contribution to this development are:
• Increased social and economic empowerment of rural women in five districts in Siem Reap, Cambodia
• Capacity building of SHG members with special focus on involvement, loan / savings methods, group leadership and advocacy (encourage group members to speak for the poor in the community).
• Training in the development of micro-businesses and support the creation of rice bank cooperatives and wells.
• To enable women to increase their household income using knowledge of improved agricultural practices, help to increase the value of their agricultural products using local marketing and through agribusiness activities.
• To strengthen the position of women and encourage them to take leadership in the many different functions that comprise their community.
The target is, that in late September 2015, the 66 SHG’s and 1,150 households have improved their incomes and reduced food insecurity.

The local NGO partner has further improved the capacity to implement and disseminate examples of project activities. 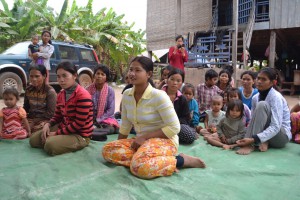