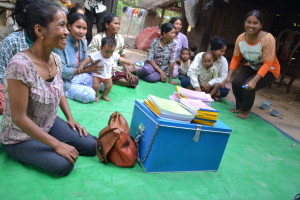 Self help group in CISOM, Oddar Meanchey is telling how their living conditions have improved through savings and how they have increased influence in their local community.

Oddar Meanchey that border into Thailand to the north, is one of the least developed provinces in Cambodia. The province is sparsely populated, but the immigration rate is high due to access to land.Poverty and hunger characterize the population, and there is a fundamental lack of basic knowledge about agriculture, income generating activities, health and nutrition, and education are of poorer quality than in the rest of the country. Since many of the residents have moved to the province in recent years, the population is not very localized, and they feel insecure and are reluctant, especially women. The area has only recently opened up after the Khmer Rouge war. The area was actually the last real stronghold in Cambodia of the Khmer Rouge fighters until the mid-90s.

After many years of conflict there was only few residents left in the province, but with the increased security and access there has been a large immigration in the recent years, of poor landless families from other areas in Cambodia where the population density and land prices are high. These people have to re-start their livelihoods and the food security of these residents is low, the soil is sandy and rainfall is not stable. It seems that the fluctuations in the amount of precipitation have increased in recent years. About 15% of the households are headed by a woman who has problems feeding the family.

In recent years there has also been a conflict between Cambodia and Thailand because Thailand claims a few Buddhist temples from ancient times that are located in the border area between the two countries. From time to time soldiers and civilians are killed as a result of the conflict. The conflict is now being handled by the United Nations, with hope for a speedy resolution. An armed conflict creates uncertainty and the project can not work in the villages directly involved in the conflict.However it is very clear that this area need some help to get started.

The project aims to increase food production in a sustainable manner, which includes both environmentally and climatically suitable production methods. This is one of ADDA’s core competencies. The method is called Farmer Field Schools. First a number of local farmers are trained as trainers and they will continue through the project and have an important role as advisors. After this, the trainers start up the farmer field schools, that covers cultivation of various crops such as rice and vegetables and small livestock (pigs and chickens) with around 25-30 participants per field school. The farmers are encouraged to use the designated cultivation techniques at home as well.

The aim is also to develop a democratic civil society from a grassroots level, which will mainly focus on poor women and other vulnerable groups. In Phase 1 will be formed 80 micro-credit and self-help groups. With democratic principles of social groups and commercial activities the groups will try to influence the local policy priorities. In the second phase associations of self-help groups for advocacy will be formed and will influence the conditions for the poor and vulnerable in the province.
An important goal is also to support and develop the local NGO partners, so they are better equipped to provide support for poor farmers in order to improve their living conditions.